Get every detail about NTS GAT General Test for admissions in MS, MBA, or MPhil program in Pakistani universities and know the answers to the related FAQs.

What is the NTS GAT General?

Based on various fields of study, NTS has categorized the GAT General test into four main types: GAT A, GAT B, GAT C, and GAT D. Each type covers the same syllabus but has the difference in weightage of the three components:

GAT A (For Business & Engineering)

Attempt our GAT A Mini Sample, which has 25 questions with answer explanations!

GAT B (For Arts & Social Sciences)

Never miss out on our GAT B Mini Sample, which has 25 questions with answer explanations!

Are you aiming to apply for MS in Software Engineering, Agriculture, Veterinary, Horticulture, Biology, Clinical Medicine, Public Health, or Physical Sciences such as Astronomy, Computer Sciences, Physics, Chemistry, Mathematics, and Statistics? If yes, then GAT C is for you.

Would you like to attempt our GAT C Mini Sample, having 25 questions with explanations?

Students from Madrassa backgrounds may also apply for Master’s programs in various specializations such as Fiqh, Tafsir, Logic, Arabic Language & Literature, Aqedah, and Hadith. Thus, GAT D is for students having HEC recognized Master’s Degree or equivalence from HEC.

Just take our GAT D Mini Sample, which has 25 questions with answer explanations!

As discussed earlier, GAT General has four categories, and each has a different weightage of the three sections. So, the syllabus also slightly varies for each type according to the weightage. However, overall course work remains the same. In other words, you can prepare from a single GAT General book, irrespective of the category you choose to take NTS GAT General. Thus, every graduate from any field of study has a unique GAT General curriculum to follow.

You might be looking for a comprehensive GAT Test Syllabus.

The NTS GAT Quantitative Reasoning does not cover just Math. This curriculum tests how well the graduate can reasonably solve the math puzzle. For this purpose, students should know Math tips and tricks to solve problems in a limited time. In general, the GAT quantitative reasoning syllabus covers Arithmetic, Algebra, Geometry, Word problems, Probability, Business Math and Statistics.

The GAT Analytical Reasoning section tests Critical analysis, Common-sense, and Logical thinking through various question types. These mental skills are much handy in other exams in addition to GAT. For instance, Managerial-level jobs require problem-solving and analytical skills to make the right decision in this new challenging world. This section is the hardest part for many people because students need a proper strategy and common sense to answer correctly. GAT analytical section includes two types of questions: Logical reasoning and Group reasoning. 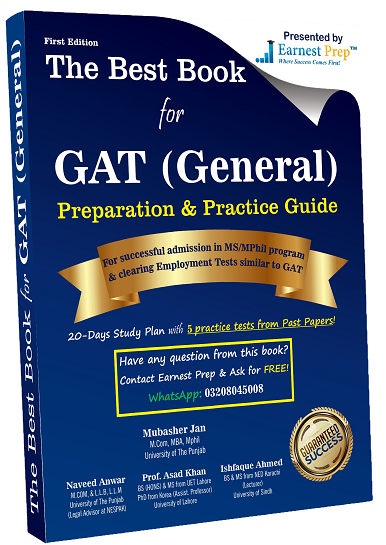 Why is GAT General Test so Important?

One has to complete MS or MPhil degree to apply for good jobs, specifically in public sector organizations. Better education means better salaries and lower unemployment rates. Furthermore, government jobs require the MPhil degree as a minimum qualification to apply for at least a 16-scale job. Moreover many organizations may also take the GAT test as part of their job application criteria. These scores are then supplemented with other relevant information to make decisions.

Over the years, the GAT General has gradually become one of the most widely accepted tests for postgraduate admissions in Pakistan. It has become so prevalent that many companies have started taking tests similar to the GAT General for shortlisting candidates. Not just that, international scholarship applications such as Commonwealth Scholarship also require the HEC HAT test, which has a similar paper pattern as that of the NTS GAT test.

What does the GAT Test Measure?

You might be interested to know NTS GAT Test Schedule.
Important Note: Please make sure that you have completed at least 16 years of formal education (either a straight 4-years bachelor’s degree or a combination of 2 years bachelor’s plus 2-years master’s degree) to apply for MS or MPhil program in a Pakistani university.

Getting Ready to take GAT?

If you are planning to take NTS GAT General test, you should have at least 20 days